2017 Hyundai Elantra: All This and More

Compact cars were once considered to be stepping stones to at least a midsize model. That may no longer be the case and buyers both young and old are looking for style, content and capability in smaller packages (assuming they’re not going for a crossover). The all-new 2017 Hyundai Elantra is built to compete—and we do mean built. 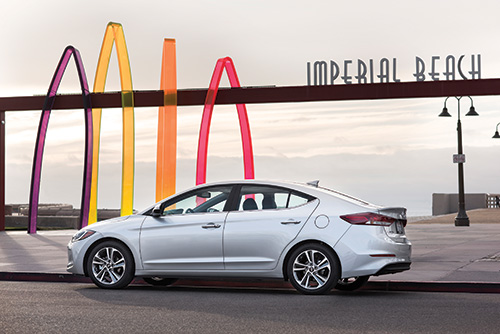 Hyundai Elantra is the sixth generation of the compact car. It is designed and engineered to compete with products including the Toyota Corolla, Honda Civic, Mazda3 and more. Scott Margason, Hyundai Motor America, director, Product Planning, says that they take a “class-above" approach to development of vehicles, so he notes that while the 2017 Elantra offers 95.8-ft3 of passenger room and 14.4-ft3 of cargo space, the 2016 Audi A4 provides only 91- and 12-ft3, respectively

An indicator that underscores the level of importance that Hyundai ascribes to the all-new, sixth-generation Elantra, a compact car, is found in the adhesives used. That’s right: one of the bonding methods that is being used in the production of the car in two plants, one in Montgomery, Alabama, and the other in Ulsan, South Korea, probably says more about the car than any number of other things. 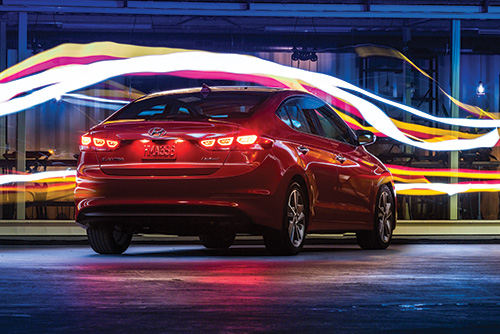 While this isn’t a wind tunnel, it is certainly representative enough to note that the 2017 Elantra has a coefficient of drag of 0.27, which is 0.01 better than the fifth-generation car. Helping achieve that are an underbody cover, a rear bumper bottom spoiler, and a wheel air curtain that takes in air along the sides of the daytime running lights and moves it across the sides of the front tires.

Sure, one could point to all of the sophisticated technology that is available in the car, ranging from adaptive cruise control to automatic emergency braking with pedestrian detection, and say that’s indicative. And that tech deployment is certainly notable because, again, this is a compact car, and compact cars, with few exceptions, tend to be overshadowed in importance by midsize and full-sized cars, and so while the larger cars get the tech, the smaller models get less in the way of any amenities of note (although it seems, points out Dave Zuchowski, president and CEO of Hyundai Motor America, that larger cars are giving way to crossover utility vehicles, both large and small, so their importance is being diminished). Still, it goes to the Dow Betamate structural adhesives from Dow Automotive(dowautomotive.com) to get a powerful, telegraphed sense of what they’ve accomplished in engineering this car.

In the fifth generation, there are 9.8 feet of structural adhesives deployed. For the 2017 model there are 393.7 feet. You’re not thrifting a car when you are adding that much additional material to supplement the spot welds, to make a car stronger and quieter.

There may be other vehicles that use more structural adhesives, but there are probably few, if any, that, on a comparative basis, whether we’re talking size or price, out do the used Hyundai Elantra.

And then there’s another thing. The steel. The amount of advanced high-strength steel (>60 kg/mm2) that’s used in the structure. For the last-generation vehicle, they used 21 percent. That’s not a trivial number by any sense.

But then there’s the new one. It uses 53 percent of the steels, including hot-stamped materials. What’s more, they’ve redesigned boxed sections for things like side members from being rectangles to hexagons; they’ve straightened the A-pillar; and they’ve even tailored the outer B-pillar so that there’s 150 kgf material essentially above the belt line and 100 kgf below for crash energy management.

What do the materials and the adhesives and the redesigns get them? Well, for one thing, there are improvements in body rigidity (104 kgf•m2/rad), both in torsion (26.8) and bending (9.2), which are 29.5 percent and 25.3 percent increases, respectively, over the outgoing model.

That, of course, contributes to a better ride, as well as a quieter cabin. But there are other factors that contribute to those attributes, as well. One of the two engine options is this, a 147-hp, 2.0-liter four that runs on the Atkinson cycle (the intake valve is left open longer to create a shorter compression stroke). It provides 33 mpg combined when mated to a six-speed automatic.

A better ride is also achieved through a rear configured rear suspension. Scott Margason, director, Product Planning, explains that in the previous generation, the rear damper is oriented more in a diagonal orientation (“laid down") and is comparatively short. For the new design of the coupled torsion beam axle, the damper is nearly vertical and much longer, providing the ability to tune it better.

Also contributing to improved NVH (noise, vibration, handling) are things like an isolated sub-frame, with the front bushing made of TPE and the rear rubber. There is an improved carpet foam and the layer density in increased compared with the previous generation material. There is a PET-felt material used for the rear wheel liner.

And they’ve even addressed noise transmission through the dash panel by making the holes for pass-through purposes 28 percent smaller than in the fifth-generation car.

Under the hood there is a focus on providing good fuel economy. There is a 2.0-liter engine that uses the Atkinson cycle, which is more commonly found in hybrid applications. It can be mated to either a six-speed manual or a six-speed automatic. This engine produces 147 hp at 6,200 rpm and 132 lb-ft of torque at 4,500 rpm. When mated with the automatic—which, is a new transmission that is designed to be more efficient with a 34 percent-smaller oil pump, uses double ball bearings, features new valve body, and has a multi-disk torque convertor— it returns 29 city/38 highway/33 combined mpg.

Then there is an “Eco" version of the 2017 Elantra that is fitted with a 1.4-liter, turbocharged four with gasoline direct injection. It produces 128 hp at 5,500 rpm and 156 lb-ft at 1,400 to 3,700 rpm. This engine comes with a seven-speed, dual-clutch transmission. Although certification isn’t complete at the time of this writing, Hyundai engineers estimate that the combined mpg number for the Eco model will be 35 mpg.

Dave Zuchowski talks about “the democratization of technology," about how the sorts of tech that was introduced in the top-of-the-line Equus and Genesis sedans are making their way into cars of a more-modest price point, into cars like the used Hyundai Elantra for sale. There is the aforementioned automatic cruise control, based on radar, and the automatic emergency braking with pedestrian protection, based on radar and camera sensors. There is lane departure warning and lane-keeping assist, based on the camera and on the electric power steering system (in the event of a drift out of a lane without a turn signal being activated, torque is put into the steering wheel to make an adjustment to the path). There is rear-cross traffic alert and blind spot detection that make use of radar sensors in the rear bumper; those sensors are also used for lane-change assist.

“The compact car segment and the buyer have changed," Zuchowski says. “It used to be about practicality vs. emotion.“ The compact car, he suggests, “used to be an appliance, something that was purchased based on affordability, low cost of ownership, and fuel economy." Now, Zuchowski says, it isn’t that those attributes don’t matter, but that people are looking for a well-designed, maneuverable, and personable car."

Zuchowski points out that in 2015 total car sales in the U.S. market were down by 2 percent, yet Hyundai’s car sales were up by 2 percent. And of the Hyundai car offerings, both in terms of overall 2015 sales (241,706) and percentage increase over 2014 sales (+8.9 percent), the Elantra is the key car in the showroom. What’s more, they are forecasting a 1.5 percent increase for the overall compact car segment for 2016 (to a total segment size of 2,231,960 units), so the 2017 Elantra is ready to gain its share against a raft of tough competitors.