Hyundai i10 - The Best Little City Car Around 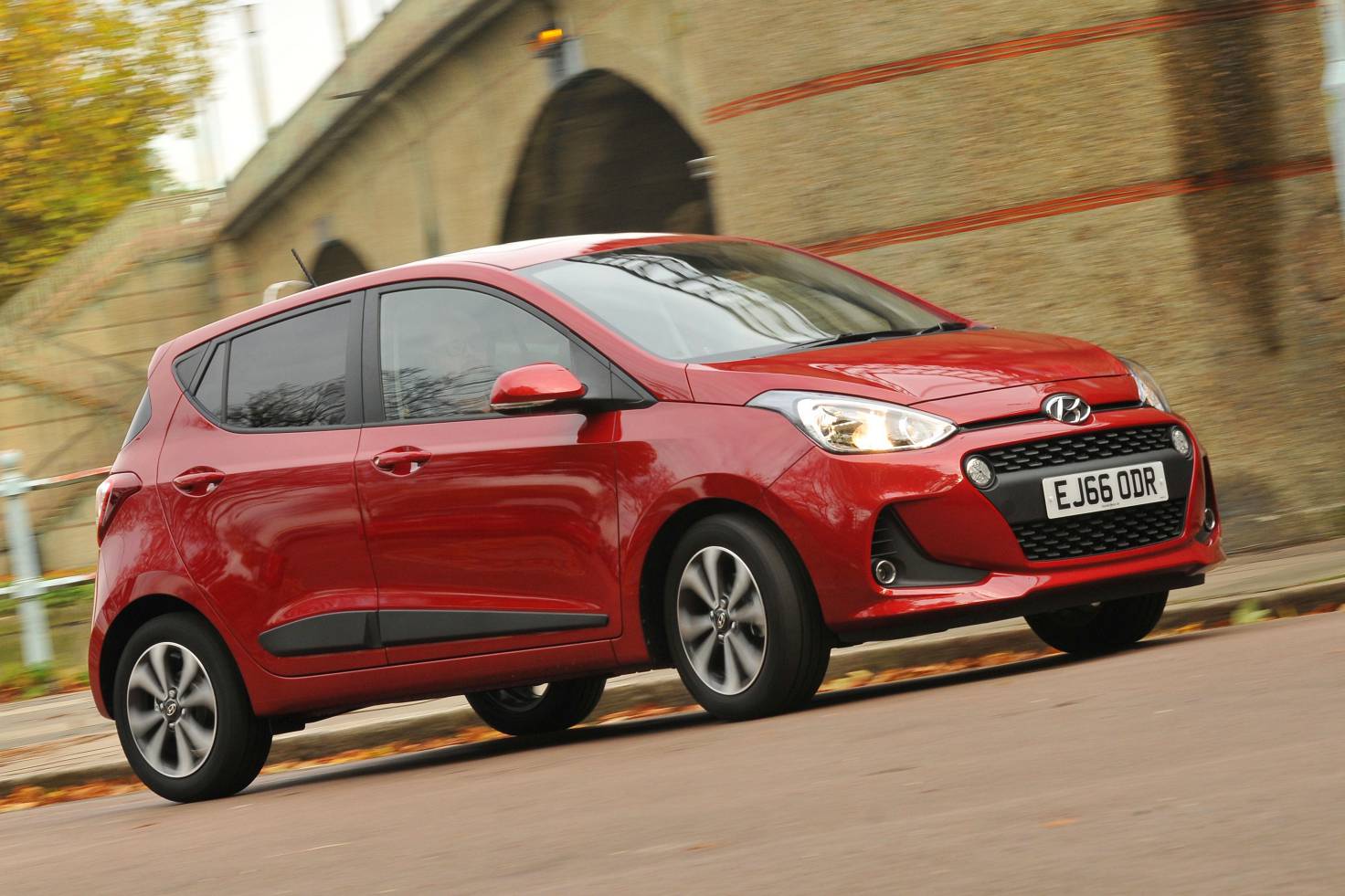 The Hyundai i10 is the best city car around. It’s quiet, roomy, excellent value for money and has a long warranty.

The Hyundai i10 is a classic city car. Short in length, tall in height and with five doors as standard, it’s all about low costs and ease of use.

This is actually the second-generation version, and it's a vast improvement on the original, offering improved efficiency, greater refinement and more stylish looks. It was facelifted in 2016, too, in an effort to keep it competitive with its rivals, with a refresh to both the exterior and interior.

All the good qualities of the i10 remain, however: its class-leading build quality, versatile interior space and strong residual values. The i10 has always been cheap to own and to run, although downsides include the lack of Bluetooth on all but the top-spec trim, and safety standards that fall short of its key rivals. Those rivals include the Volkswagen Up, Skoda Citigo and Toyota Aygo.

Read on over the next few pages for everything you need to know before buying a Hyundai i10, including our recommendations for which engine and trim to choose, and to see how it fares against its opponents in this class. 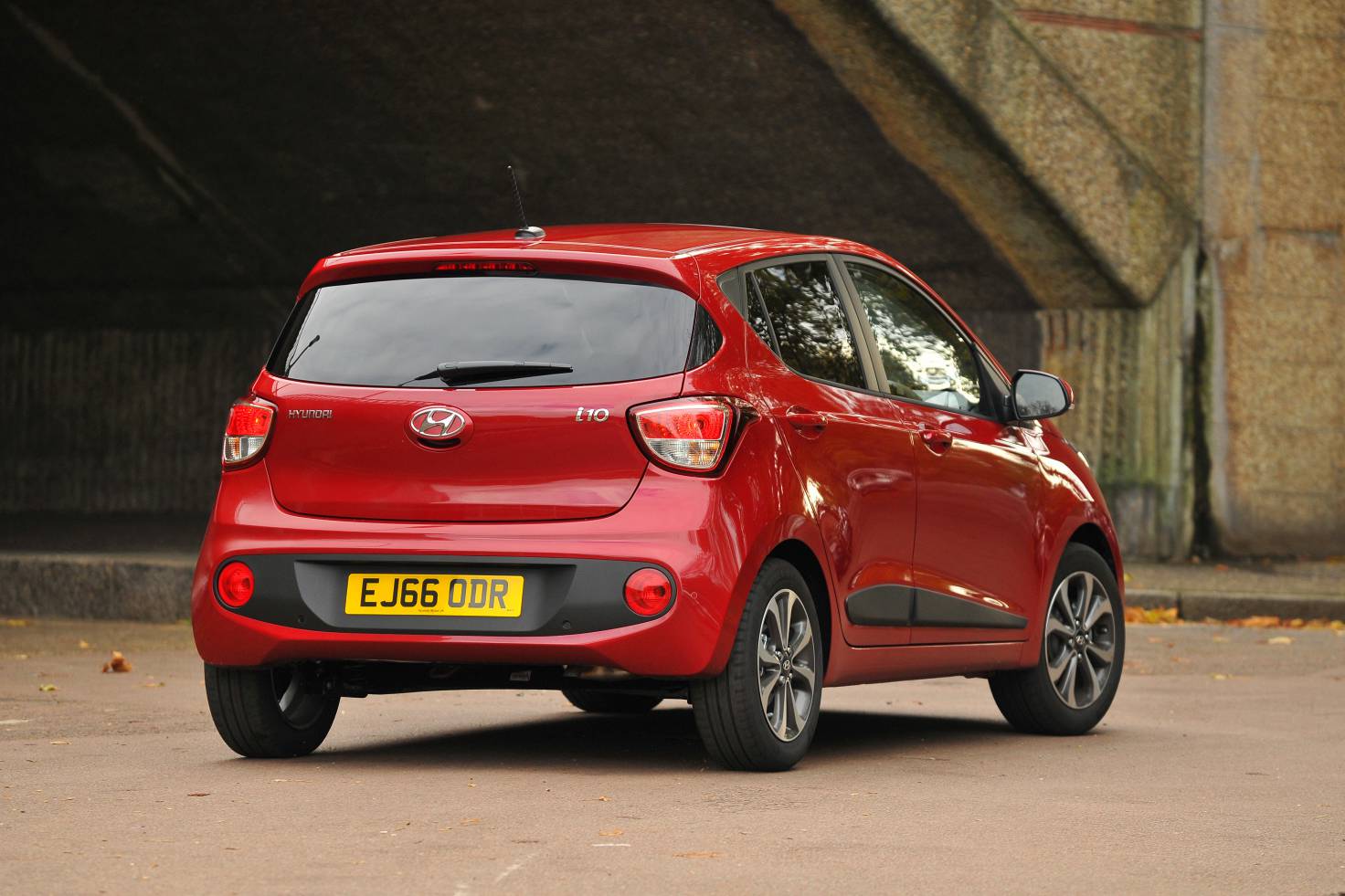 If there’s a disappointment it’s the steering, which is very vague and overly keen to self-centre. However, it’s light enough to help make parking and town driving easy, and there’s plenty of grip to give you confidence through corners. It’s not as fun to drive as the more communicative Volkswagen Up, but it is stable and easy to drive.

The 1.0-litre engine is exceptionally hushed for a three-cylinder unit. In fact, it’s actually quieter than the four-cylinder 1.2 much of the time. By city car standards, the i10 is also brilliant at shutting out wind and road noise.

The only slight disappointment is that the five-speed manual gearbox isn’t quite as slick as the one used in both the Skoda Citigo and Volkswagen Up. The four-speed automatic changes gear quite slowly, so you’re well aware of the pause in momentum if you’re accelerating hard, but in laid-back use it’s smooth enough, and it’s the best automatic you’ll find in this class.

The interior layout, fit and finish

The driver’s seat is supportive enough, although entry-level cars don’t have seat-height adjustment, and it’s a little disappointing that the steering wheel doesn’t adjust for reach in any version. The seat is set quite high, even in models that have adjustable height (from SE and up), and the backrest is spring-loaded so you can’t be quite so precise with the angle as you can with a rotary-controlled seatback.

Still, the pedals are well placed, the dashboard is logically laid out, with simple ventilation controls close to hand, and the stereo system sits nice and high in the middle of the centre console. There aren’t too many buttons, and the ones that are there are clearly marked.

You have to go for Premium trim to get height-adjustable front seatbelts, so the seatbelt is more likely to rub your neck in lower-spec models.

The forward view in the Hyundai i10 is very good. A tall windscreen and relatively slim pillars make it easy to see what’s going on around the car. However, the windows narrow towards the back of the car, leaving chunky rear pillars, so there is still a blind-spot to be wary of despite the sizeable rectangular door mirrors. Only range-topping Premium SE cars come with rear parking sensors.

i10 owners have also complained in the most recent JD Power survey that the ventilation isn’t very effective at de-misting the windscreen.

There’s no fancy colour screen on base models, but technophobes will like its simple system, which is easy to use and offers all the important functions. A single CD player and auxiliary and USB inputs are standard across the range, the latter of which allows you to control most MP3 players (including iPods) through the system, with only a few button pushes and some scrolling through your chosen menu.

The big disappointment is that Bluetooth and audio controls on the steering wheel aren’t available, even as an option, on most i10 models. Only the top-spec Premium and Premium SE trims get them, and it’s also this range-topper that gets four speakers (two in the front and two in the back), while all other i10 models get only two in the front. Digital radio isn’t available on the i10.

That said, if you are considering Premium trim, it is well worth stretching to Premium SE, which features a 7.0in touchscreen infotainment system with Apple CarPlay and Android Auto functionality. The integrated satellite navigation system, should you choose to use it, also comes with a seven-year subscription to LIVE services, which adds real-time traffic conditions and local weather updates.

The interior plastics are hard, but they’re nicely textured, which gives the i10 a neat, functional feel that continues with the well-damped switchgear. There are some shiny plastics in evidence if you look around the lower parts of the cabin, the vents feel a touch flimsy and there are some sharp edges around the base of the seats, but generally everything feels solidly put together and of a good quality by class standards.

How it copes with people and clutter

Despite the fact that you sit quite high in the i10, there’s still plenty of headroom even for tall drivers, and the long-legged will be able to get comfortable.

There’s space for your phone to sit in a decent cubby ahead of the gearstick, where the USB-input and 12V socket are housed, and there are two fixed cup holders between the handbrake and the raised housing for the gearstick. Both are deep and perfect for normal-sized takeaway cups or 500ml bottles, but you won't get a large cup or bottle in them. There is, however, a space to put a big bottle in the door pockets.

The glovebox is big enough to store the owner’s manual and a small portable sat-nav.

No city car has more space for rear passengers than the i10. The closest you’ll get is the VW Up, but the i10 has usefully more leg and headroom. You also get three rear headrests as standard in the back (unless you opt for the Blue Drive model, which seats only two in the back), and while there is a slightly raised section in the middle of the floor, passengers will still be more comfortable in the i10 than in any other supermini.

The doors also open wide and the tall roof means you won’t have to duck too far to reach a child seat; two of which can be fitted easily. There’s also room to store a big bottle in both rear door cubbies, though there are no storage pockets in the back of the front seats.

The Hyundai i10’s rear seatbacks are split 60/40 and fold via a lever on the outer shoulder. Before you can do that, though, you’ll have to topple the seat bases forwards by tugging the leading edge up and then lifting them. Then you can fold the seatbacks, which requires a bit of a shove to make the seats lie flat.

The front passenger seat isn’t available with height adjustment; it sits fairly high, and the only adjustment is for the seat back angle and to slide it back and forth.

The i10’s boot is bigger than those of most rival city cars, but the boot lip is fairly high and there’s a bit of a drop to the boot floor. It’s a fairly basic space, with no storage cubbies, but it’s deep and broad, so fitting a single, lightweight buggy should be quite easy. However, while the rear seatbacks lie flat when folded, they do leave a step in the boot floor.

Adding the optional space saver spare wheel doesn’t affect the size of the boot, because there’s space beneath the floor. There’s also a simple boot light on SE trim and above.