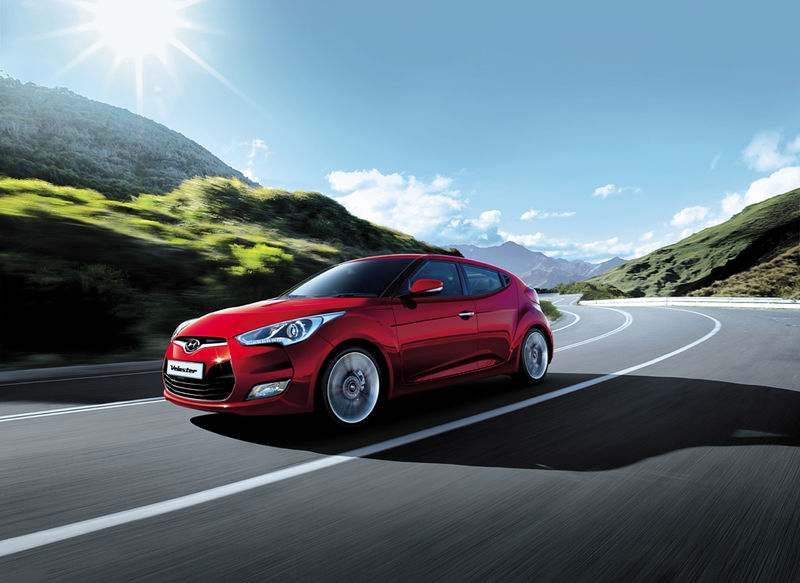 Hyundais aren’t what they used to be. And this one, the Veloster, most certainly isn’t -- albeit largely owing to the fact that it’s never existed in the first place. But the budget Korean brand is definitely evolving, in both engineering and design terms, having knocked out a few cars of late that have left mainstream European brands more than just a little hot under the collar.

The Veloster is the most strikingly alternative Korean curveball yet as either a coupe with an extra orifice or a hatch with one hinge short of a full set. Yep, it has three doors… and that’s not including the trunk. However, unlike the only other three-door oddball, the Mini Clubman, the Veloster wins the toss every time by having the extra door on the correct side of the ride in every country including Britain.

Is it an over-engineered stab at being unique or a genius solution to a question that was rarely raised? We spend a week behind the wheel of the cunning coupe to suss out just that and to see if its pace matches its sporty face.

Inheriting the basic setup from the well-sorted Hyundai i30, the Veloster is off to a good start. Accurate, if sensation-light, steering makes it an easy car to place on the road and a moderately firm ride, encouraged by the generous 18" rims our test car benefited from. These things strike a fine balance for us, and suit the Hyundai’s coupe credentials without pretending to be something it’s not… a sports car.

There’s unfortunately only one engine on offer right now and that’s a 1.6-liter, direct-injection gas unit with a meager 138 hp to its name and a frankly disappointing 167 Nm of max torque at 4,850 rpm. So, to get the most from the Veloster it’s down to you to work the stick shift hard and pump in those revs. The reality is, however, the dynamics of the Veloster don’t really suit a damn good thrashing -- cruising is more its game, and it does that fairly frugally, too, bringing the cash back at an economical 43.5 mpg (combined). It’s worth noting that a dual-clutch autobox with paddle shifters can also be optioned ($1,250) for the lazy of foot, improving the fuel economy slightly but adding a further half-second to its 0-62 mph time.

So while the ride’s not quite as hot as a VW Scirocco or a Vauxhall Astra GTC when it comes to weighing things up with its looks and a lower sticker price, the Veloster catches right back up with the more established sub-premium coupe pack.

The bold styling provides Hyundai with a striking new halo car in its rapidly expanding lineup, too. Muscular wheel arches in the far corners allow for short front and rear overhangs and offer the coupe an appealingly assertive, wide stance. A huge hexagonal graphic dominates the front end, Audi-style, flanked either side, and above on the slightly bulging bonnet, by racy vent mimicking cutaway details.

And there’s no end to stylistic drama round the back either with an expansive and tapering rear window graphic, more vent-style cutaways in the tailgate and sporty, centrally mounted twin exhausts. Our only issue is that those pipes just don’t sound as good as they look.

Inside, Hyundai continues with its trend of using relatively cheap plastics remarkably well, masking them with textures and moldings to convincingly raise perceived quality. It might not be up to VW Scirocco quality quite yet, but those clever Koreans are definitely getting ever closer. Superb sport seats, picked out in blood red for our test car, make an event of the upholstery while the detailed dash looks fresh in daylight and becomes swathed in a hue of soothing blue come evening.

Standard equipment for the top Sport spec we tested was traditionally generous including 18" rims, heated front sports seats, a panoramic glass sunroof, and 7" touchscreen and Bluetooth. An extra $2,000 down buys the premium sound system, satnav, parking cameras and the must-have luscious red leather, too.

The Veloster is a hugely likable, practical and affordable alternative coupe that does the Hyundai brand enormous credit. Why not test drive the Hyundai Veloster at a reputable Hyundai approved dealer, such as Group 1 Hyundai.
Source: https://drivingpassion.github.io/2016/03/22/hyundai-veloster-reviewed-by-askmen.html